The History and Manufacturing Process of Cast Aluminum

Aluminum is the most abundant metal element found in the earth’s crust. However, the commercial use of aluminum is a fairly recent development when compared to the usage of other metals such as iron and bronze. Today, aluminum is tempered in a multitude of ways to create lightweight, weather-resistant components that are perfect for the production of outdoor furniture, as well as many other applications.

For instance, the transportation industry relies heavily on aluminum components for engines and frames. This is due to its light weight and resistance to friction energy. In fact, it is doubtful that we would have aircraft today if not for the Wright brother’s use of aluminum components in their first operational aircraft during the famous first flight in Kitty Hawk, North Carolina in 1903. In fact, today’s commercial aircraft are comprised of roughly 80 percent aluminum. Furthermore, NASA space shuttles are produced almost completely with aluminum components and frames.

The first discovery of aluminum took place in 1807 in England. Sir Humphrey Davy called the new metal “alumina.” However, the process he used to create the metal, which consisted primarily of pouring acid onto clay, left a product that he was unable to extract from the bonded oxygen particles. Nearly 15 years later, in 1821, a Frenchman named Berthier discovered Bauxite ore in Les Bauxs, France. This discovery was instrumental in the eventual mass production of aluminum, as Bauxite ore is the raw material used in current aluminum production. A few years after the discovery of Bauxite, which contains roughly 50 percent alumina, a Danish scientist known as H.C. Oerstedt produced the first batch of what we now call aluminum. However, it wasn’t until the end of the 19th century that a process for mass production was discovered.

Two scientists, Charles Hall and Pall Heroult created a process that involves dissolving alumina (aluminum oxide) in molten cryolite. The dissolved alumina is then passed through a strong electric current. This process extricates the ore from the oxide and leaves a pure molten aluminum metal behind. This electrolytically decomposed aluminum oxide is the basis for all of the modern aluminum products that are manufactured today. In fact, the process created by Hall and Heroult remains nearly the same after a century of implementation.

Further tweaking of the extraction process, greatly credited to the research of Frederick Wohler, who was the first to isolate and define the specific properties of aluminum, eventually led to its mass production. Beyond the establishment of specific density and gravity of aluminum, Wohler was responsible for the implementation of a cheaper solvent, sodium chloride, in the aluminum production process. Before this substitution, potassium (which is much more expensive) was the primary solvent used to extract aluminum. This discovery, coupled with the electrolytic process developed by Hall and Heroult, eventually gave birth to plants that were able to mass-produce aluminum for consumer use. Prior to the development of these plants aluminum was more expensive than gold and even platinum, but the price would eventually drop more than 90 percent after the process had become mastered. Finally, the availability of cheap electricity allowed for aluminum to become the inexpensive and versatile metal we are familiar with today.

Because of its price, weight, and durability aluminum is the perfect component for outdoor furniture. Furniture constructed from aluminum is easy to move into different configurations on ones deck or garden. Furthermore, aluminum is almost completely resistant to rust. Because of its natural attraction to oxygen, aluminum exposed to air develops a thin layer of oxide over its surface which protects it from the corrosion due to elemental exposure. This also makes it the perfect metal for any product which requires long-term durability in the face of weather. Aluminum’s ability to retain structure and appearance for a long time, coupled with its relatively inexpensive cost make it the perfect medium for tables, chairs, and other fixtures for outdoor decoration.

Bring Autumn Splendor to Your Table for 20% Less 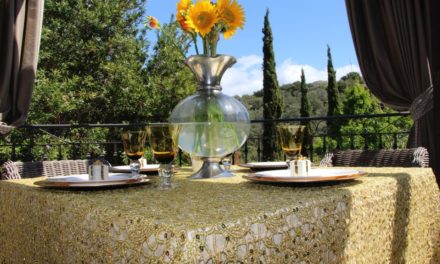