Lace work is a craft that is done to enhance certain fabrics, mostly for decorative purposes. Lace is commonly associated with the “doily,” a small covering for tables and end tables. However, lace is also used as a larger table covering. Lace fabric is often thrown on top of a solid tablecloth to enhance the appearance of the dining setup. Lace napkins are also a popular craft. Laced fabric features intricate open- hole work. There are a variety of patterns, which are created through many different techniques.

The first true lace-work was practiced as far back as the 15th century. However, evidence of early lace making has been discovered in Ancient Roman ruins as well. While lace work religious vestments were seen in the early Catholic Church, it wasn’t until the 16th century that lace was a major craft seen all throughout Europe. Then, in the 19th century, Native American tribes put their spin on lace work to create the North American style. It is thought that they learned this craft from European missionaries. Like sewing, lace work and embroidery were considered one of the more acceptable occupations for women who wished to earn income while remaining in the household.

Lace is made from a variety of mediums. While modern lace is most often made from cotton thread, certain contemporary artists also use extremely thin silver or copper wire to make their creations. There are also an abundance of synthetic fabrics and blended fabrics used in modern lace-craft. In the past, lace was more often made from finer mediums such as gold, silk, or linen threads.

There are many different styles of lace-work, which result in a myriad of different patterns. Essentially, lace is made by braiding, twisting, or looping fabric thread to create an open-faced pattern. There are two major schools of lace-work: The first, needle lace, is often considered the purest form of the craft. Needlework lace is made using freehand needle and thread. It allows for the most versatility, as there are no set patterns employed. However, needle lacing can be very tedious and time consuming. Perhaps the most popular form of lace work is known as bobbin lace. Bobbin lace is made over a “pillow,” onto which pins are placed which hold thread. Then, bobbins of various sizes are used to weave the thread together to create uniform open-faced patterns. One of the most popular patterns, “chantilly lace,” is made from a pillow and bobbins.

Besides the two most common forms of lace-craft (needle lace and bobbin lace), are a slew of other procedures used to manufacture lace products. For instance, cutwork lace starts with a solid woven piece of fabric. Sections are then removed to create the signature open pattern. The remaining weave is then embroidered or wrapped with more thread. This is also known as “whitework lace.” “Tape lace” is made from a fabric strip, which is enhanced with embroidered patterns. “Macramé” is a craft made primarily from knotting thread into lace with a “tatting needle.” Lace can also be made by crocheting, knitting, and also by machine.

Many European countries have their own style of lace born from the advent of the craft in the 15th and 16th century. While lace is often seen as an adornment on clothing (especially ceremonial clothing such as wedding dresses), lace is almost always employed as interior decoration. Lace table coverings can add a measure of sophistication when used over top of a solid colored tablecloth. Moreover, sturdier tablecloths with open-faced lace embroidery can be used as a singular table covering. When adorned with lace napkin accessories, lace tablecloths can give your dining area a sense of old world charm that will be a definite hit at your next formal dining event. 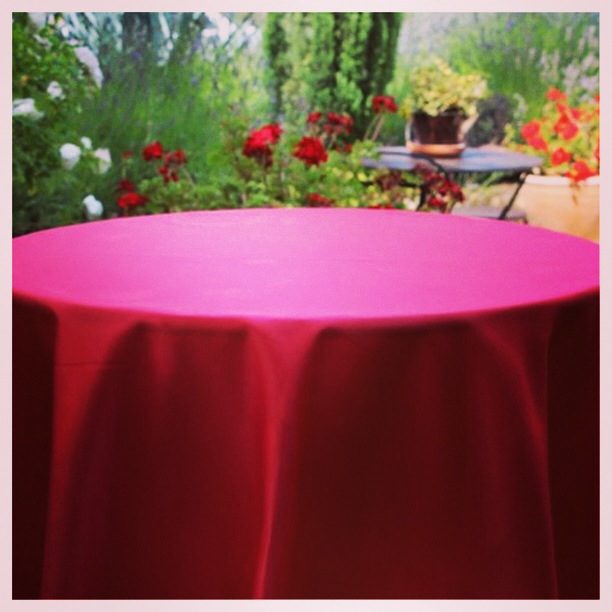